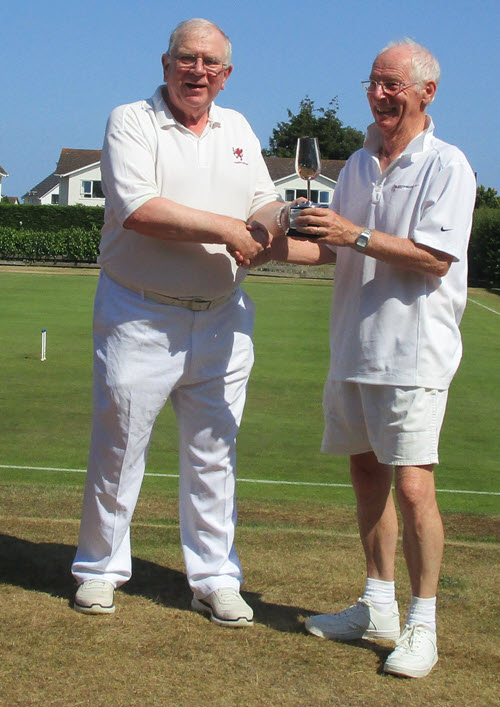 The National Seniors proved to be the usual popular event at Budleigh with the Class entry, initially, substantially over-subscribed. However, as seems to be the norm in these times, Covid struck with a vengeance. A withdrawal from the Class event, starting Thursday, was advised on Sunday following 2 requests for late confirmation due to injury/surgery recovery - both had to withdraw. Monday 8.50am Covid struck and knocked-out an entrant to all 3 events - a replacement was found by 9.10am for the doubles - phew - and the 12 pairs started in the glorious sunshine which held for the week. Fortunately, the Tournament finished before the really high temperatures of the week commencing 18 July.

The 12 pairs broke down, after the initial byes, into a neat X / Y format of 26 point games with a 2 hour 45 minute time limit. Tactical, careful play was, as usual in doubles, much in evidence. Eleven of the 12 pairs had nominated partners which left Peter Thompson [York] and John Wells [Downham] to play together.

The X Finals saw a very close match between Peter Thompson & John Wells and Chris Donovan [Sidmouth] & David Wise [Norwood / Adelaide]. The latter pair hoping the Damocletian bisque would not be used before time was called. Peter Thompson ran a couple of hoops to draw level and with 5 minutes to go, called for the bisque! Why is it, so often, that the better player uses the bisque to win? This on top of John Wells [8] peeling Peter [2] twice!! Do I sound bitter? Moi!? So, the CA Cups went to John Wells and Peter Thompson who won +1T!

Long covid led to a withdrawal from the Singles handicap and the manager twisted the arm of Neil Fillery [Taunton Deane] to stay on from the doubles and play. With reluctance, but good grace, Neil sought approval from his 'Superior Authority' who said the jobs list was merely postponed; he played. Again the 22 entries worked out into a neat X / Y format. John Wells won the Y but had to leave early on Saturday. Hence, he was unable to collect his consolation bottle of Malbec and the Manager is not absolutely certain he has forgiven him for snatching victory in the doubles - the bottle may 'get lost in transit'. The Croquet Gods played their cards with the usual panache and thus, of course, Neil Fillery won the Handicap Singles and took the Quiller Cup home.

The manager left the final block arrangements to Wednesday evening as there had been 1 withdrawal from the doubles and handicap singles and 7 from the Class event, pre-week, during the week and at the last minute. Consequently, he was uncertain until the final evening who would be playing but, it turned-out that blocks were 8 strong bar one.

Blocks B to E were scheduled, in turn to have no play sessions to accommodate the originally anticipated, extended A Class. These were kept to ensure the untimed games could be the more easily fitted in, if single banked. Chris Roberts & David Warhurst oversaw the A Block games and these were all finished bar two by close of play Friday. This caused a little unhappiness for the others having to play on Saturday but, most games went to time and 7 games unavoidably carries into Saturday play.

And so to the results:

The trophies were awarded by Jonathan Isaacs on behalf of the CA:

E Block for the Julie Horsley trophy was won by Neil Fillery - yes, his handicap has reduced to 4 from 4½!

D Block for the Nigel Graves Trophy was a clean sweep for the Tournament Manager - Chris Donovan [Sidmouth] [and back to 2.5]

C Block for the de Ansorena Cup saw a tie on 6 games each and thus on Who beat Whom Peter Thompson lost to Nigel Amos [Budleigh Salterton] who took the Cup.

B Block for the Colin Hemming Cup saw another two players tie on 6 each, therefore, on who beat whom Peter Nelson lost to Alex McIntyre [Nottingham] who took the Cup.

The Budleigh hospitality and care for the competitors continues to be first class with John O'Gorman, Club Chairman, covering every aspect with good humour and efficiency. The lawns were a pleasure to play on - Oh the benefit of a greensman rather than a groundsman - can we poach Richard Quelch??? It was a good to see a strong turn-out for AC and we hope to continue these good numbers next year.