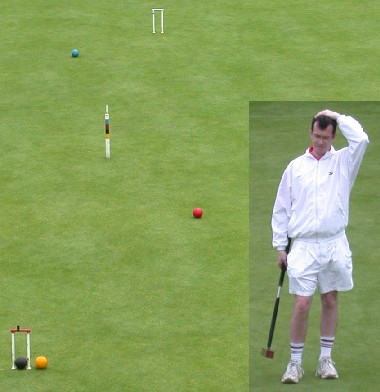 Most of the visitors found adjusting to the Dawson 2000 balls difficult, both for ratio and gauging the pull. It was notable that at the end of the first day only the Irish, Dave Maugham and Jonathan Kirby had completed triples.

Turn of the match has to go to Martin Murray, who hit in on turn 3 and went round making a dream leave, except he failed to notice that the rush from the east boundary was for his opponent's ball! Ed took the long shot into corner 4. Martin marched on and played the rush he had left, only then to realise his error.

A great laws debate was triggered when Ronan stuck in 5 during a standard triple, Ian (pictured) hit blue by 6 and took off to rush-peel black to red, only to finish slightly short and with a very difficult shot. He eventually shot hard and managed to peel black by a few inches but he (and the referee) failed to remove the clip. He completed a double peel and contact leave in corners 2 and 3. Ronon came on and pointed out that the clip should be on 6. Much debate later, referee-on-call Dave Maugham offered a replay from before the peel, which Ian agreed was the point in the break where he would have taken a different line of play. Ian declined and allowed play to continue.