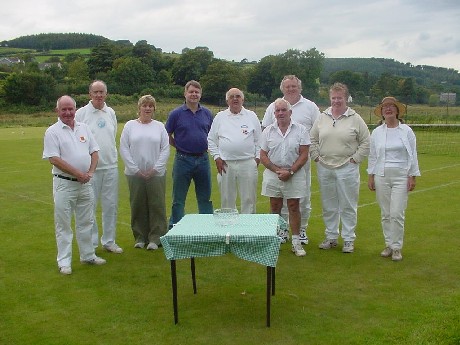 by Gail Curry at Crake Valley
7th September 2003 (Other News)

Crake Valley is a small club nestled away in the south of the Lake District, situated in the village of Greenodd. It has a chequered history involving croquet archery and tennis. However, its recent history is firmly based in croquet, due largely to the efforts of Bob Vaughan, who sadly passed away in January of last year. Bob was an inspirational driving force, and we all know how important it is to have just such a person to drive a club forward. Needless to say he is sadly missed not just in his own club, but also through the northern region. His wife, Liz, kindly donated a trophy to celebrate Bob's efforts and it was decided that the trophy would be played for annually between two teams representing Crake Valley and Croquet North, with a mixture of advanced and handicap play. The inaugural event was played, contrary to the weather forecast, in glorious sunshine and a good spirit. The hospitality of the club was, as ever warm and welcoming, and both players and spectators enjoyed a memorable days play.

Alas Crake did not manage the fairytale ending of winning the trophy, but it was not the winning but the taking part that made the event so special. Croquet North eventually won 7-2, but will be happy to invite the Crake Valley Team to their side of the Pennines to compete again for the trophy and to remember Bob.