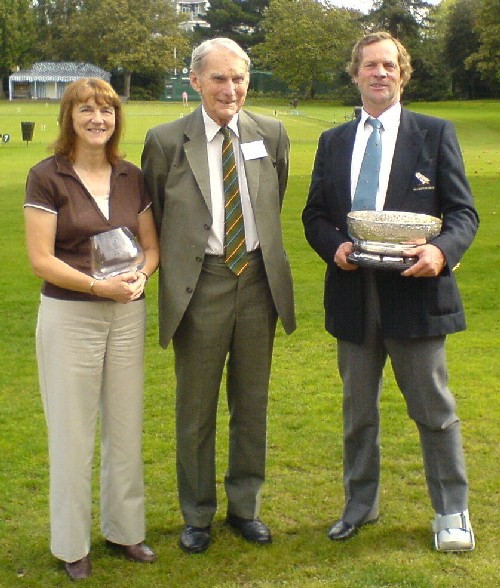 by Klim Seabright at Hurlingham
26th October 2007 (Other News)

The CA AGM was held at Hurlingham on Saturday 13th October. The minutes of the AGM will be available in the Members' Section of the Website and in the Gazette as soon as they have been approved.

One of the most pleasant duties of the day is for the President to present awards to clubs and individuals who have made significant contributions to Croquet. It is also an opportunity for award winners to visit the impressive Hurlingham Club.

Bernard Neal presented a Council Medal, the most prestigious award, to David Magee who has done many things to enhance croquet at both a national and local level but his recent organisation of the World Championship was of particular note.

Next came the presentation of a Lifetime Coaching Award to Don Mears for his many years of passing the benefit of his knowledge and experience to "would be" and experienced croquet players.

The Coach of the Year Award was made to Jennet Blake. Although Jennet does play "both codes" she is probably best know for the tremendous contribution she had made to Golf Croquet.

The Croquet Diploma is awarded to those who have made a significant contribution within their own club or within a region of the CA Domain, this year's citations are shown in the archive section. Not all were able to travel to London and their diplomas are being passed to their clubs for presentation at some suitable event or occasion.

Finally the President turned to the Club awards.

The Townsend Club Award went to Cornwall Croquet Club and will be presented at the Federation AGM.

The Apps Heley Award was shared between Royal Tunbridge Wells Croquet Club and Leven and Crake Croquet Club. Council member Charles Waterfield presented the award to Crake Valley (as it is usually known) during a pause in play at one of their tournaments.

Please look on the CA website or in your copy of the Croquet Association Club Handbook for details of how to nominate clubs and individuals.

AGM minutes are available in the members' area.