Growth and Recruitment in the CA

Concerns have been expressed about perceived declining levels of competitive croquet across the country. This has often been attributed to a growth in 'social croquet', which is not confined to Golf Croquet but certainly this variant represents the greater part of the rise in non-competitive play.

A CA Recruitment Working Party and the CA Marketing Committee set about measuring whether the concerns were justified and determining what could and should be done about it. This is a summary of the report, which was ratified by the Council in March 2011, and which include a change of direction of the CA's Growth and Recruitment Strategy.

In addition, The CA is keen to spread existing good practices that encourage competitive play in clubs. Please share your club's experience with the CA Office and the Marketing Committee will gather the good practices and publicise them to all clubs.

Despite a slight increase in the number of CA tournaments advertised in the Fixture Book, the absolute numbers of people entering them has fallen over the past three years. The table shows entries, per person per event, for 2008-2010.

Entries for AC tournaments has declined by an average of 12% (with entries in the lower end of competitive AC, handicap singles events, down 20% and handicap doubles down 27%). Meanwhile, entries in GC tournaments (13% of the total) have stayed roughly constant, while the number of GC players has surged.

Additionally, a survey of clubs was undertaken in both 2006 and 2010. Latest figures show that the proportion of all club players who play in any external competitions (including federation events and local leagues) is down to just 25%. This national average masks significant regional variations, from 6% in the West Midlands to 50% in the South East (though the latter unfortunately being an estimate based on incomplete data).

These statistics, along with considerable anecdotal evidence (e.g. some federations being unable to continue with local events and some competitive players being 'crowded out' of certain clubs with large numbers of social GC players) confirm that competitive croquet is in decline. Indeed, this appears to be as much a problem for GC as it is for AC.

More work needs to be done to fully understand why this is happening (for instance, the recession, with travel and accommodations costs becoming less affordable, has no doubt had some impact).

The Role of the CA

The CA does not have a Growth and Recruitment Strategy as such. It has largely been left to clubs to recruit as they see fit, and the CA has provided support. 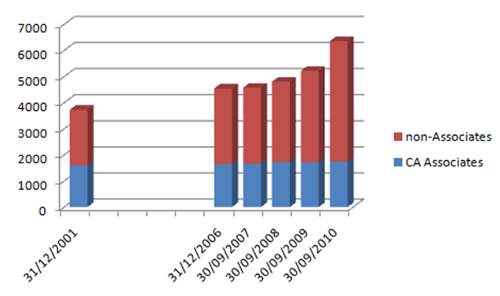 The result of this has certainly been success in terms of numbers: The chart shows a compound annual growth rate of 8.75% within member clubs over the past four years, though it should be said that about half of this increase is because the number of member clubs has increased from 142 in 2006 to 182 in 2010, with much of this increase being because previously non-affiliated clubs have joined the CA.

Nonetheless, existing clubs have grown their numbers substantially, and the majority of growth has been down to recruiting social GC players (said to be "picking the low hanging fruit"). While this has been a success of sorts - with many clubs now finding themselves on a firm financial footing - it has raised other problems, one of which is the reduction in the proportion of competitive players.

Croquet is essentially a competitive sport and the CA should concentrate on promoting competition. This is a fundamental question which the CA Council needs to address. It might affect the CA's attitude to development grants, for instance; or it might mean that for investment in new or expanding clubs the CA should look for a 'return', in terms of additional Individual Members.

Along with a decline in the proportion of competitive croquet players, we have seen a decline in the proportion of club members choosing to join the CA as Individual Members. It is down from 45% in 2001 to 27% in 2010. The CA is greatly concerned by this, not only because of the obvious threat to its funding but also because it is unhealthy for the national body of any sport to have the support of only about a quarter of those players benefiting from its work.

There are insufficient benefits of becoming an Individual Member and some federation representatives have passed on feedback from grass roots club players that the current fee of £37 is too high - that is, the CA fee to allow entry into tournaments might be too great a hurdle. This season the CA has taken a first step to rectify this, by improving its cut price offer to new Tournament-playing Individual Members.

One longer term option is a rebalancing of the CA's income. For instance, the capitation fee for members of CA clubs is only £7. Based on the 2009 accounts, if this were to have been £10, then the membership subscription could have been reduced from £35 to £24, while maintaining the same total income.

There are now calls for the CA to take a lead in formulating a Growth and Recruitment Strategy, which will not only deliver increased numbers of players but also the 'right kind of player', who will be keen to participate in competitive croquet and to join the CA as Individual Members.

The CA paper went on to explore the characteristics of the 'right kind of player' and to suggest where they might be found. It is not intended to be a complete blueprint of how to implement the new Growth and Recruitment Strategy. However, the strategy should influence CA Marketing, Development, Coaching, as well as how we finance our sport.

Some of the ideas explored are discussed below:

There are also 'arid areas', with just one or two small clubs but considerable potential, such as:

This summary was prepared by Kevin Carter on behalf of the CA Marketing Committee and the Recruitment Working Party, and first appeared in The Croquet Gazette, issue 332. The full paper, Growth and Recruitment in the CA, is available to Members of the CA.