Rule 11.2.10 deals with the fault of lawn damage caused by a mallet when a stroke is played.

It is only a fault if the damage, before repair, is significant enough to be capable of affecting a subsequent stroke played over the damaged area.

Rule 16.2.12 prohibits a player from attempting to repair lawn damage before it has been ruled upon.

Potential lawn damage will often occur during a game without a referee being present. The players may dispute whether the damage is sufficient to count as a fault or may claim it is caused entirely by the ball. A referee is often then called in to adjudicate.

To test whether the damage is sufficient to affect a subsequent stroke, a ball should be rolled diagonally across any marks to make the test - does it run straight or is it deflected? Some players will try to claim an opponent's shot is faulty with even the slightest of scuffs - but if the rolling ball isn't deflected, it is not a fault.

Damage caused by the ball is most likely on a very wet lawn and on longer jump shots played as a very hard drive at a slight downward angle. This will always show itself as an elliptical depression in the lawn surface: see Figure 2. While you might expect the grass surface within the depression to be quite smooth, in fact the ball can cause tears in the turf across the line of aim - these can easily be incorrectly attributed to the mallet. 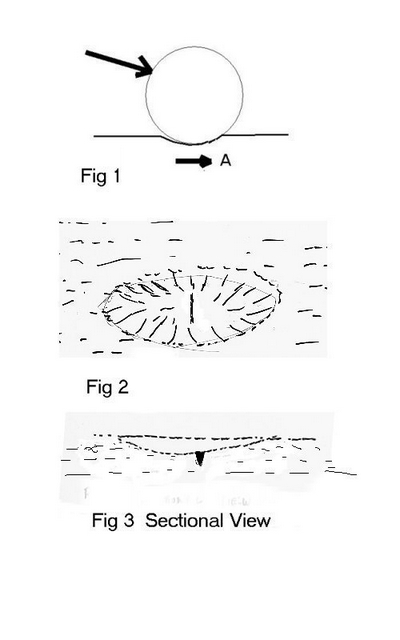 Figure 1 shows the initial stages of the jump shot. The ball is driven into the lawn surface in the direction of the upper arrow. The forces exerted back onto the ball by the ground causes the ball to jump. The secondary damage within the depression comes from the tearing action of the lower surface of the ball as it is forced forwards and downwards by the impact of the mallet before the ball starts to rebound.

Where lawn damage is in the form of an elliptical depression in the surface, this will be almost certainly be caused by the ball. If you find secondary cut or tear marks within the depression across the line of aim, these too are likely to be caused by the pressure of the ball on a thin layer of turf. The only way secondary damage should be attributed to the mallet is where the damage can be matched to the striker's mallet. The primary tests are whether the way the stroke was played is consistent with the mallet face contacting the ground and whether the face of the striker's mallet shows signs of grass or soil on its lower edge.

Example Photographs of Lawn Damage Caused by the Ball 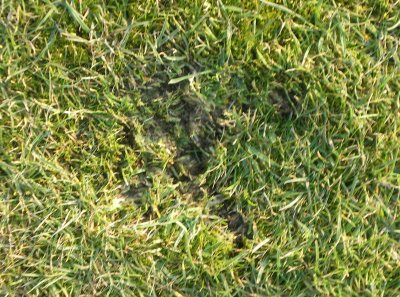 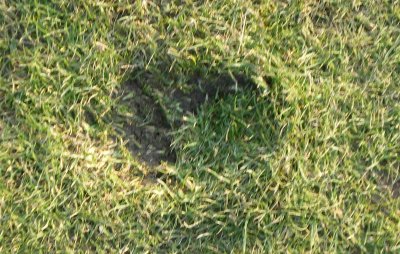 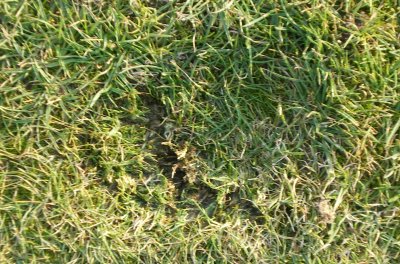 These photographs were taken on damp ground in February and are the result of a massive jump shot played with a square mallet. The damage within the depression is entirely due to the ball and cannot be attributed to a square mallet end. Hitting direction is left to right.