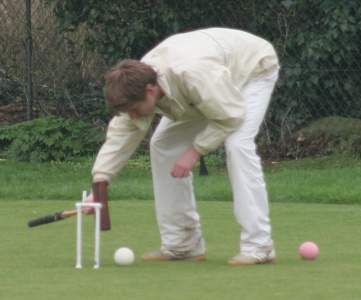 A hampered shot in which a fault may be committed should be watched by a referee. (Picture of Russell Bretherton at Surbiton)

Players are jointly responsible for applying the rules or laws in all games, even in tournaments. However, if there is an official referee available, they should be asked to adjudicate on any stroke in which either player suspects that a fault may be committed, or in the event of uncertainty as to how to proceed with the game.

Sometimes you just need someone to adjudicate on a simple matter such as where a ball crosses the boundary (not retrospectively though), for which you don't need a qualified Referee, just an independent observer, who can be any knowledgeable spectator, or a player from another game.

The Croquet Association makes provision to train and examine several grades of referees (separately for Association Croquet and Golf Croquet):

Assistant Referee (AC only): an assistant referee can officiate at any game, match or event (for major tournaments: if so authorised by the Tournament Referee) in routine situations, including watching for potential faults and adjudicating wirings, but is not expected to have a full knowledge of the laws covering more unusual ones. Under regulation R3.1.1, Assistant Referees would normally ask a full Referee to adjudicate when a matter of Law is to be interpreted that is not clear to them.

Referee: a qualified referee can officiate at any game, match or event (for major tournaments: if so authorised by the Tournament Referee).

Championship Referee: some of the most experienced Referees have qualified to officiate at top-class events.

The powers and duties of referees are spelt out in the Tournament Regulations.

Usually, a referee acts as a Referee on Request - called on by the players either to watch a problematic stroke about to be played or to sort out a problem after it has happened.

Occasionally, when the situation demands, a referee may be asked to supervise a match and become a Referee in Charge.

All significant tournaments controlled by the Croquet Association or a Federation will normally have an appointed Tournament Referee: the official with responsibility for nominating and allocating authorised referees, and hearing appeals.

To become a referee you should attend a training course and pass the relevant examination administered by an Examining Referee, separately for Association Croquet and Golf Croquet.

Courses are run usually at the beginning of the season and various locations around the country. Check the Fixtures Calendar for details of advertised courses or contact your local Federation to register your interest and provide motivation to schedule such a course.

Often, there is insufficient time to administer the examinations immediately after a course. If you have attended a course and want to pass the exam, please contact a local Examining Referee, who will be delighted to work with you towards your qualification.

For more details and other resources see: