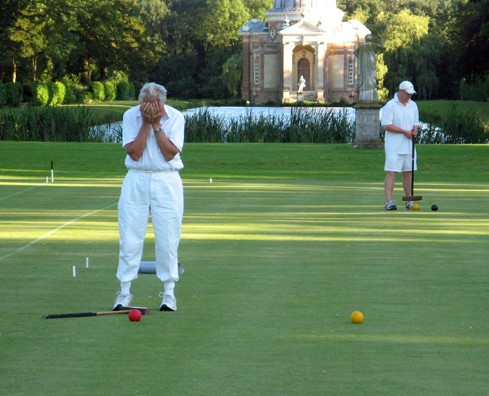 Tom Anderson is in tears after another missed 1 yard roquet (against Gina Lewis) (Photo: John Bevington)

This years August weekend tournament at Wrest Park was won by club member Ben Ashwell. His first visit of the season to his home club proved a successful one, dropping only one game over the weekend.

Day one ended with three players unbeaten and two others hot on their heals with only one loss. Rod and Ben, both Ashwell's, had won three out of three, as had Terrey Sparkes, who, with a handicap of 2.5 played brilliantly to defeat players of a much lower handicap. The next two were Nick Butler and Jack Wicks, who were both on three out of four. Wicks having lost to Rod Ashwell, after Rod 'just did enough' by hitting the wrong ball when taking his lift and finishing in three turns, after three misses from Wicks - who needs sextuples, or even triples!

There were two games pegged down overnight. One started at around 4pm, and was pegged down at 8:30pm, it was then resumed at 9am on Sunday morning, and at 11am the manager imposed a 1 hour time limit. The game finished at noon with a score of 24-22. I bet no one can guess which local member was involved in this feast?

On Sunday morning father took on son, the top game in the first round of the day. Son (Ben) prevailed after a long struggle, to leave him as the only unbeaten player. Wicks overcame Richard Smith while Butler saw off Sparkes.

In the next round Wicks beat Butler, Rod lost to Jerry Guest and Ben lost to Phil Cordingley, meaning no one remained unbeaten. These results confirmed that in round seven Wicks would play Ben Ashwell in the final.

Ben won the toss and chose Red and Yellow.

Ashwell pegged out to achieve his first ever OTP victory, but more importantly to win the tournament. Thanks went to Rod Ashwell the manager, the 'lawn management' team and those club members who generously gave their time to provide the catering.