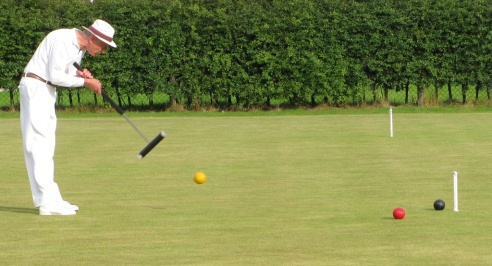 The weather of much of the summer almost seems a distant memory in the glorious improvement of the past week and the sun blessed the rural setting of Ashby Croquet Club as the Londoners from Dulwich made their way up to the East Midlands.

As often seems the case, the drive left the visitors in a slightly sluggish state and in the doubles the home players gained a rapid advantage. Indeed, so rapid that the rubber was over with the other two rubbers only just getting going in their second games. Pierre and Andrew did put up a decent fight in the second game with one side dominating in turns over the other (the scores going 0-3, 4-3, 4-5, 7-5). Meanwhile, Simon achieved good consistent clearances and with play speeding up in the second game, levelled the match score at 1-1 by beating Mike. With a hot lunch waiting, Christine and Guy paused at 1-2 in their second game, Guy having just run hoop 3 with a delightful, delicate jump shot (whereupon he emulated the dance for joy of his mentor Simon Carter!).

The doubles players were able to start their singles matches as soon as lunch was over, while Chris and Guy resumed. This latter rubber became pivotal to the whole match. Guy seemed slightly unsettled by his lunch (one too many of the deliciously crispy roast potatoes?) and Chris began to draw away, eventually winning the game and giving Ashby the momentum of a 2-1 lead while the other rubbers were still in the balance.

Andrew had not been able to bring his best form to Moira and the Tim was able to give the home side a 3-1 lead. However, the match was still very tight; Pierre had fought back against Rachel and started to run his trademark long hoops. Chris was struggling to stay with Simon. Only Mike looked relatively comfortable, having taken his first game against Guy. Chris did force Simon to hoop 13 but, in a slight comedy of errors, Simon stuck his first approach to the back of the hoop, Chris approached with her wrong ball and the two players continued out of sequence for about a dozen shots until Simon persuaded Chris that she needed to play her other ball and they returned to sequence without noticing what had happened. Simon soon followed with the winning shot. Pierre won the third against Rachel to take the match score to 3-2. In the end, Mike was the player who was able eventually to make his contribution to the Ashby success, delivering the match victory as he took the second game, leaving the match between Chris and Simon irrelevant.

If Chris had not won the game paused over lunch then the deciding third game would have been held over and then she would have potentially had to play three further games to determine the fate of the whole match. Undoubtedly, she was very glad that she did not have to undergo this experience but having won both her rubbers in the previous round against Hunstanton she has had a very strong season. Simon was the star for the visitors (three games won, none lost) and each Ashby player contributed to the victory, so they all had reason to be happy.

Ashby go forward to the final to play Winchester at Letchworth on Saturday 29 September. Winchester will appear in a final for the first time. Ashby are in their seventh final, drawing clear of Surbiton on six appearances, no other club appearing more than twice. However, Ashby have only won the Championship once. Ashby has five players appearing in the English National Golf Croquet Singles Championship (the Ascot Cup) on 22 and 23 September, with Will Gee returning from a summer in Germany and, given that these five do not include Chris Mounfield, competition will be tight for places in the team. Meanwhile, Winchester has been the surprise package of the Championship with some strong support from their top AC players, so the final will no doubt be highly competitive.