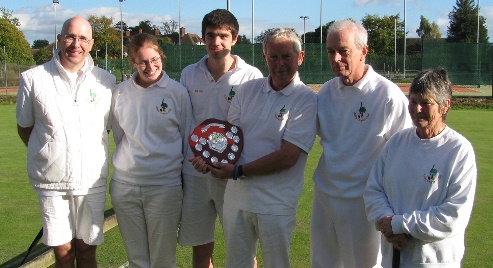 Ashby beat Winchester in the final of the 2012 Golf Croquet Inter-Club Championship despite Winchester putting up a stiff fight in the morning rubbers and gaining a 2-1 lead at lunchtime.

For the second year in a row, Letchworth Croquet Club hosted the final of the Inter-Club Championship, only having two courts available but both providing a fair test of skill in being fast and generally true. The weather of earlier in the week had relented and play took place in fine sunshine for the whole day.

As usual, neither captain had indicated to the opponents their teams in advance, so the first excitement of the day was to discover who had arrived to play. The changes from previous rounds turned out to be Ashby being able to recall Will Gee [handicap 0] after he had returned from working in Germany for the summer and, for Winchester, unfortunately, Nigel Hinde [0] having been called away to the USA. Jo Burnaby [3] was the last moment stand in. However, the other three Winchester players had won all 11 of their singles rubbers during the season (winning 23 of 27 games).

2012 saw the introduction of a change to the regulations for the GC Inter-Club Championship so as to follow the AC equivalent and instead of using handicaps to determine the team player orders, using the rankings instead. As a consequence, Ashby was not able to treat Will, Tim King [0] and Rachel Rowe [0] as equivalent, which would probably have allowed the highly successful pairing of Will and Rachel to play doubles together. However, recent results had allowed Tim to just sneak past Rachel in the rankings and, thus, the latter played in third position for the team.

In the morning rubbers, Rachel had relatively little difficulty in beating Jo in straight games. On the same court, Roger Barnacle [0] and Mike O'Brian [1] had a closer battle. In the first game, Mike had the chance to jump at Hoop 12, leaving Roger without first approach to 13. However, in the excitement, Mike forgot to concentrate on actually succeeding with the jump shot, so lost 5-7. In the second game, Roger went 4-0 up and although Mike fought back well, he was not able to make up the deficit. As a consequence, the third and fourth players had served up a 1-1 match status.

Meanwhile, the doubles swung one way and then the other. Some strong early hoop running by Tim gave the Ashby pair a 3-0 lead and they built on this gap to take Game 1 with a relatively comfortable 7-5 victory. David Nicholson [2] and James Tuttiett [2] for Winchester then seemed to relax and played well to take Game 2 (7-4). With the rubber between Roger and Mike finishing during Game 3, the potential importance of the doubles result became apparent. Will and Tim seemed to take a small but crucial early advantage. However, David and James refused to succumb to the pressure. Will and Tim had to come from behind to level the scores at 5-5. At which point, James attempted to lose the match but approaching Hoop 7 instead of Hoop 11! However, Tim did not capitalize on this mistake and eventually, David and James held their nerve and gave Winchester the 2-1 lunchtime lead when Will peeled the opponents through Hoop 12. Once again, the aptness of the seven-rubber format came to the fore and left everyone contemplating the fine balance of the match as they ate their food.

Whatever was in the food though, was clearly to the liking of the Ashby players. Within about 15 minutes of restarting play, Winchester had only scored a couple of hoops to a dozen for Ashby. The Tournament Director had prepared a "large print" scoring mechanism, involving laminated A4-sized numbers, magnets and the steel sides of the two Letchworth equipment stores. Thus, the Ashby players were able readily to look up, realize the extent to which they were performing well, relax from any tension over the lunchtime score and continue the general excellence of their play. Rachel for instance won her first game 7-0 and carried on with similar dominance to level the match score at 2-2. All was not total plain sailing in that Tim managed to relinquish a 4-0 lead, allowing James back to 4-4. The Ashby players did not drop a single game though and, in the end, Mike clinched the match for Ashby when he won the fourth rubber point.

Winchester played bravely but the Ashby team has built a strong spirit over the past few years of consistent team membership and, having a team of players ranked 4, 18, 24 and 77 (versus 51, 52, 53 and 261), the eventual result was far from a surprise. Will gradually picked up the level of his play during the course of the day, suggesting that he is on course to being ready for the World Team Championship in November. Earlier in the season, Ashby had been grateful for strong performances from both Chris and Ray Mounfield to get the team to the final and they were able to spectate and join the victory celebrations.

Just when all the players thought that the excitement of the day could get no greater, Roger brought the Olympic summer to a grand crescendo by running a Croquet Olympics as a finale to proceedings. He took this creation of Jill Catt from Dogmersfield and encouraged most of the players and some of the spectators to participate in the four events of the javelin, wheelchair croquet, hop-skip-and-jump and the 100-metre dash. The precise details can wait for another report but this ingenious form of fun tested some obvious and some slightly less obvious croquet skills and eventually the Ashby team took a clean sweep of the gold, silver and bronze positions. (Could this be the new means by which to select players for teams?)

Letchworth were gracious hosts and by providing spectators throughout the day very much added to the atmosphere of the final.