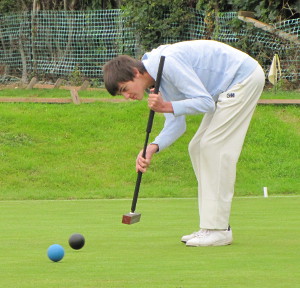 Fourteen-year old Joe Iddison from Peterborough won the AC All England Handicap Final - one of the youngest ever players to do so.

The event was played as a 5 round Swiss with Joe, David Frost from Enfield and John Dawson from Chester all finished on 4/5. With 'who beat whom' unable to produce a winner, Joe won on the second tie-breaker, sum of opponent's scores.

Joe, who is only 14 but has been playing since he was 9, had the benefit of the most bisques playing off 16, with the rest of the field mostly between 7 and 10. On Saturday Joe relatively cruised to 3/3 where he was joined by David Frost who had also had 3 convincing wins. Saturday was a day of Silver medals, with David Boyd, Tony Elliott and Susan Fulford all earning theirs, John Bristow having the privilege of signing for two of them.

Joe and David Frost played first thing on Sunday in a match that looked key to determining the tournament winner. Joe ran out of bisques on penult and peg with a big lead, but David came back to reach penult and peg himself and had the chance to finish but failed penult. Joe was able to peg one ball out, but then missed the peg gently from 3 yards the next turn. David now hit, sent Joe's ball to a corner, but lagging back to partner in corner 3, hit 4b and finished on the wire. Joe lagged to the peg, but then David produced a fantastic shot, virtually running hoop 3 from the corner to hit partner and save the game. Joe had three more shots but missed them all, including one from the north boundary that, with David's ball in front of the right hand wire of rover, hit more of the left wire than seemed possible. +1 to David.

David needed a win in the last round to seal the tournament and played John Dawson, John only having lost to Joe. John made the better start to have a 4b and rover v 2 and 2-back lead but as in his last game David made a good comeback to level the scores and it looked like momentum was with David. At that point John got back in, and finished quickly to win +6. Joe won his last game against Tony Elliott comfortably and took the title on the tie-breaker. All three players who reached 4/5 played great stuff. Joe has a nice technique for his single ball strokes and an excellent temperament and tempo to his play. David who has played more golf than association showed great touch and tenacity from behind. John has a good all round game.

Congratulations to everyone who played for having made the final and thanks to Colchester for hosting the event.