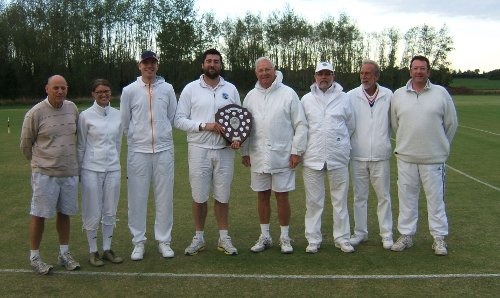 The players in the Secretary's Shield Final at Wrest Park (Photo: Ian Vincent)

The final of the Secretary's Shield was hosted by Wrest Park on their new lawns, which are reached by turning left from the drive as you enter the park. They have a much larger pavilion, with electricity and running water, and no need for a bicycle to reach the toilet! There are currently three lawns, but ground is being prepared for a fourth: turf was being lifted and replaced to remove a slight ridge to the side of one of the existing lawns during the afternoon. The soil appeared to be sandy rather than clay, so should be better drained. There is an expansive view of farmland. The club was very hospitable, providing some excellent cakes for tea.