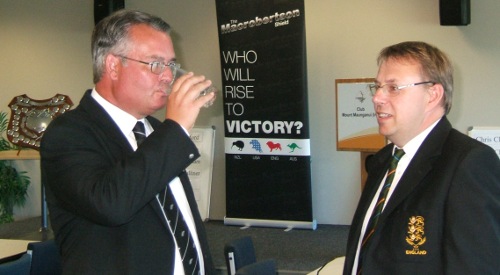 The third and final pair of test matches for the MacRobertson Shield have started in Mt. Maunganui, on the East coast of New Zealand's North Island. The venue is a multi-sports and social club, with six lawns and a magnificant clubhouse (pavilion would be nowhere near doing it justice!). The weather is forecast fine and about 24 degrees for the duration, except for a front coming over on the third day.

England play New Zealand to decide the series. The England team order is unchanged, as is the top of the New Zealand one, which means that James and Paddy will play on the final day, as will Robert Fulford and Chris Clarke, who used to be doubles partners for Great Britain before Chris moved out to New Zealand. Australia play the USA for 3rd place.

Despite a couple of early wins, England lost all three of the opening doubles matches. James Death went round quickly on the third turn and finished after Stephen Mulliner went round to take the first game against Jenny Clarke and Greg Brant, but failed to hit in the second game. Stephen went to 1-back in the decider, after Jenny had gone to 4-back, but James stuck in hoop 1 with a sextuple or tpo ahead of him.

On the other front lawn, David Maugham and Jamie Burch made little impact on Aaron Westerby and Tony Garrison. At the far end, Robert Fulford and Samir Patel won the first against Robert's former doubles partner, Chris Clarke, and Paddy Chapman, lost the second and got to 4-back and peg in the decider, but Paddy hit the lift and Chris finished with a triple.

On the second day, New Zealand went 5-0 ahead before England finally won a rubber. Burch and Maugham lost in two games after Burch was pegged out in the first, after an interrupted TPO by Chris Clarke and Paddy Chapman, and had no play in the second. Stephen Mulliner, with both Aaron Westerby and James Death's balls at 4-back also elected to do a TPO after roqueting the opponent's ball instead of partner, leaving a 2-ball ending, but this proved fatal when Toby Garrison won from hoop 1 against 4-back. They again got no play in the second. Robert Fulford finished the first of his games with Samir Patel against Jenny Clarke and Greg Brant with a quadruple, but lost the second after sticking in 3-back to leave a TP for Greg. Samir did a TPO in the decider, and Robert won the nervous end-game, which included a replay after a misplaced clip. There are six singles games tomorrow.

The third day's weather forecast reduced the rain predicted earlier to the chance of an afternoon shower, and I woke to a mixture of blue sky and cloud. However, a Westerly wind got up in the middle of the day.

The reverse singles, of which England needed at least one rubber to keep the test alive, were:

Samir Patel v Jenny Clarke: Jenny took the first +17tp and also the second to give NZ a 6-1 lead.

David Maugham v Aaron Westerby: Aaron won the first +19, and the second to give NZ a 7-1 lead.

James Death v Chris Clarke: James won the first 12 tpo and the second, to take the test into a fourth day. NZ lead 8-2.

Stephen Mulliner v Greg Bryant: Stephen won the first +26, but lost the three ball ending in the second -2. However, he won the final game +17 to leave the teams sharing the honours on the day, but NZ 8-4 ahead.

Three of them were late starts, as there are only six lawns available for the 9 matches (Australia and USA are playing doubles), but games here have been much quicker than at the other venues. Australia ended the day leading the USA 9-3.

The fourth day will have three doubles matches, of which England must win at least one to take the match into the final day. It is sunny, but still with a strong Westerly wind. The courts are drying out.

Stephen Mulliner & James Death v Chris Clarke & Paddy Chapman: Chris and Paddy won the first +15, after James seemed to have trouble getting the speed of the court. Stephen played a fine break and James finished from 4-Back to win the second +17. Chris and Paddy each played good breaks to take the decider +24. NZ lead 9-4.

David Maugham & Jamie Burch v Greg Bryant & Jenny Clarke: Greg and Jenny won the first +4, after 3.5 hours and a pegged out ending in which Jamie hit several times but could not get a break. David and Jamie are also well behind in the second, but got back in to take the game +6 to level the match at 17:00. They won the third about 8pm to leave NZ with a 9-5 lead, our first doubles victory.

Robert Fulford & Samir Patel v Aaron Westerby & Toby Garrison: Robert and Samir won the first +6, after good 3-ball break from Samir after Robert had TPO'd. However, it didn't finish until after lunch and, by 4pm, no-one had made a break of more than three hoops in the second. A 2-ball ending, which started with Rob on 4 and Toby on 4-Back, reached a position with both balls for rover and the balls on opposite sides of the court. An impasse was declared, but the first attempt to resolve it ended with the same position. (After a toss, the balls are played from baulk, and no roquet can be made until ten turns have been played or the turn after a ball has run a hoop for itself). In the second attempt, Rob lagged from baulk to in front of rover; Toby tried to clear but missed into 3rd corner; Rob ran the hoop and lagged to a position between hoops one and two; Toby missed and Rob hit the peg, to leave NZ 9-6 ahead, with six singles remaining.

Meanwhile, Australia have got over the line to take the test against the USA and hence 3rd place in the series.

The forecast is for cloud until evening with only sea breezes, but the sun has already broken through. There are six singles, three starting at 9am and the others following. England need to win 5 of them to take the test, being 9-6 behind. In reverse team order:

Stephen Mulliner v Aaron Westerby: Aaron won the first +17, leaving NZ just needing two games from the three rubbers in play for victory. He also won the second +25, to give NZ a 10-6 lead.

Jamie Burch v Jenny Clarke: Jenny won the first +26, but Jamie took the second +17 and third +3, to give England a 7th rubber.

Samir Patel v Toby Garrison: Toby won the first +14, with a 12 yard peg-out, and finished the second from shorter range after Samir missed his last shot, to take the test and series for New Zealand.

The remaining matches had no bearing on the overall result.

Detailed results and commentary are on the croquetscores website.