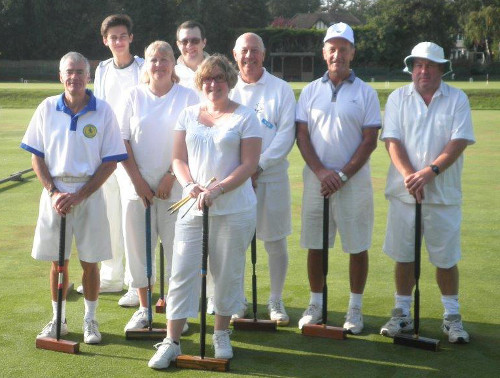 The finals of the All England Handicap were held over the weekend of 13/14 September 2014 in glorious autumn weather in the serene setting of the Colchester Croquet Club. This year the Tournament Organiser, Peter Wilson, and the Manager of the Final, Colin Hemming, decided that there would be eight qualifiers from the area finals, and as a result the finalists were afforded the rare luxury of playing all matches single-banked. Also, being such a small group we got to know each other well, and a spirit of friendship and camaraderie developed over the course of the weekend.

The eight finalists were:

This year the handicaps of the finalists fell within the narrow range of 9 to 14. The maximum number of bisques available in any game was six, and as a result most games became open and interesting very quickly. The fact that four competitors recorded four wins and four competitors recorded one win might suggest that the competition was one of two halves. This was not the case, since many of the games could easily have gone the other way.

The award for brinkmanship went to Tony Elliott who had two "cliff-hanger" matches. In his match against last year's winner, 15 year old Joe Iddison of Peterborough, Tony was on peg and rover whilst Joe was on peg with his remaining ball. Joe shot at Tony, missed and left his ball near to rover. Tony proceeded to run rover and peg out both balls from 6 yards to the applause of everyone watching. Against me Tony was one hoop behind as the clock entered its last minute. Tony rolled his two balls the full length of the lawn and danced beside them along the green, emulating his namesake Billy, in an attempt to beat the clock. Then after time he ran two hoops to secure the narrowest of victories.

Another exciting finish was in the match between Lucy Beach and the "cavalier" of the weekend, Nick Archer. Nick was on peg and peg while Lucy's two balls were on rover. Being a zero handicap GC player, Nick had been hitting in with amazing accuracy throughout the match. But at the last hurdle his missed his partner ball and Lucy pegged out for a dramatic victory. Throughout the weekend Nick played in a free spirit, attempting hoop runs that most AC players would refuse. In my match against Nick I left him with a four ball break after playing an "air shot" at hoop five. Nick punished me severely for this error by taking his first ball all the way to peg, with two peels of his partner ball en route. This superb break earned Nick a Silver Award. The eventual winner, Graham Good, also secured his Silver Award during one of his Sunday matches.

The four competitors with four wins took part in a GC style "shoot-out" to determine the winner. I felt that it was a shame that after 15 hours of hard-fought Association Croquet the result of the event had to be determined this way. But in fairness to Colin Hemming his hands were tied and the method that he chose was clearly the most practical that time would allow. Graham Good secured victory by running hoop from the boundary with two of his four balls.

Before presenting the awards Quiller Barrett, CA President, highlighted some of the illustrious winners of the competition over the past 50 years. He thanked the members of the Colchester club for agreeing to give up their four lawns for the weekend and congratulated Georgeen Hemming and her team of assistants on the excellent culinary delights that they had provided (at least half of which had been efficiently despatched by young Joe, without any noticeable effect on his sylph-like figure!). Finally he thanked Colin Hemming for the highly efficient way that he had organised the weekend, sentiments which were wholeheartedly endorsed by the competitors. I would like to add my personal thanks to Colin, in particular for his words of consolation at the end of the weekend. I think that Colin was much taken with my comment that "you don't learn much by winning", but I claim copyright on this.

I have played many round (and oval) ball games over the years, but in none of them have I found such courtesy, integrity and generosity of spirit as in croquet, and I don't know any other ball game where the participants act as their own referee. Why didn't I take up the game earlier?

The above 3, plus Tony Elliott, all finished on 4 wins out of 5, and the result and places were decided on a tie-break