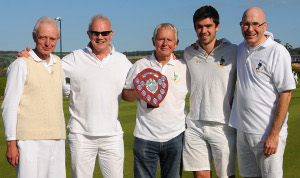 For the fifth time, Ashby and Surbiton met in the final of the GC Inter-Club Championship, Surbiton having won on three of the previous occasions. Each team took their number of appearances in the final to 8 (the next nearest teams only having 2 appearances).

For the first time, the two teams met at Cheltenham as the neutral venue, partly because Letchworth was already unavailable due to Autumn maintenance. Cheltenham ended up being ideal because this allowed for the co-location of both the Inter-Club and the Murphy Shield finals.

The Ashby team were pleasantly surprised to discover that the Surbiton team was short of one of their most regular stars, Stephen Mulliner. In balance though, Ashby were unable to field Rachel Rowe.

The early exchanges went well for Ashby, winning all three opening games by the same score of 7-5. Tim King then was quickly ahead 6-1 in his second game against Nelson Morrow, who then proceeded to make a comeback before Tim was able to take the first point for Ashby. Shortly afterwards, David Bell made the score 2-0.

Meanwhile, Surbiton started to play with more authority in the doubles, winning the second game by a comfortable margin. As is often the case with these matches, the teams then decided to put the remaining game on hold and take lunch instead.

After lunch, Surbiton started the stronger side, with their doubles players both showing good form. Will Gee and Mike O'Brian both lost their first games 2-7 to Howard Cheyne and Samir Patel, respectively. Nick also began to play better, so Surbiton went one game up in three of the four rubbers. David held his nerve though and took the first game against Nelson.

In quick time, Samir was the first player to register a point in the afternoon, bringing Surbiton back into the match. Will and Howard were also playing briskly with Will turning this rubber around in three games to score the next point and leave Ashby one short of victory. Meanwhile, Nelson was finding everything going against him and was far behind David, who scored the winning point only a few minutes after Will's success.

Nick and Tim were still in their second game and both suffered slightly from the distraction of the courtside celebrations. Nick drew ahead 6-3 before Tim fought back to take the game to the thirteenth hoop, where Surbiton prevailed and gained themselves a second point. The doubles had been rendered redundant, so both teams retired to congratulate Cheltenham on their excellent hosting of the final.

Director of the Championship, John Bowcott, was in attendance and made the presentation to Ashby, who were supported by several members who had made the journey down the M5 from the Midlands. During the course of four rounds, Ashby had fielded a total of seven players, the others being Ray Mounfield, Chris Mounfield and Rachel Rowe. Mike O'Brian and Tim King were the only ever-present members of the team.

Despite not having won since 2011, Surbiton remain clear on five wins in the Inter-Club Championship but Ashby move up to three wins, ahead of Dulwich and Tyneside who are the only two clubs on two wins.

Finalists of the GC Inter-Club Championship