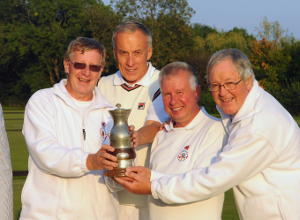 The day was initially misty, damp and cold but eventually the sun came out and the afternoon was played in pleasant autumnal sunshine. George Noble had prepared excellent courts ready for the morning's play.

The club provided an excellent lunch with a choice of Asian dishes. Our president was surprised to find that an excellent glass of Pinot Noir, which he suggested came from New Zealand and must have cost at least £13 actually was a French wine retailing at less than £5 from ASDA!

After a lunch where many were spotted having second helpings afternoon play commenced.