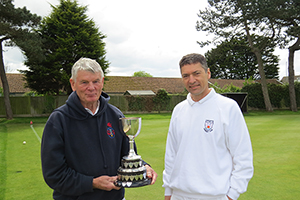 The Prichard, Hunstanton April 29 - May 1st

Unfortunately the top of the Leader Board, Mark Avery was forced, by a stomach bug, to withdraw at the start of the last day throwing the Manager's "well thought out plans" into disarray.

However the day was saved by use of the AMD clause and the two remaining contender's George Noble and Duncan Reeve were invited to play a Best of Three tie breaker "final" for The Lord Fermoy Cup which George won + 26tp +11tp.

In pretty good weather for the time of the year some 87 games, 18 of which finished with tps, were played by the 24 entrants on Hunstanton's well prepared lawns.