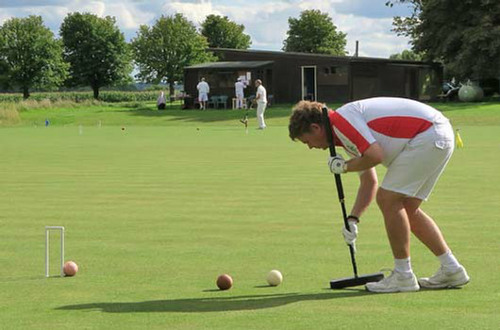 David Maugham prepares to peel pink through 4-back en route to a quadruple peel against Phil Cording (Photo: John Bevington)

David Maugham won the Advanced Tournament at Wrest Park held between the 12th and 13th of August.

A flurry of late applications transformed the entry from a collection of club hackers to an alternative to the Eastern Championship, with minus handicaps much in evidence.

The state of things to come became obvious in the first round, where on lawn 1 club members Bryan Harral and John Bevington were despatched 26SXP and 21TP by David Maugham and Phil Cordingley respectively.

Neither of them quite recovered and they finished the tournament without a win between them. Manager Rod Ashwell was sufficiently tactful to deny them the chance of playing each other for outright ownership of the traditional Wrest Park banana awarded for last place.

David then lost to a Jeff Dawson TP, but this stirred him to a +16TP win against Debbie Lines, a +23QP against Phil and the possibility of going through the peel card from single to sextuple. The quintuple was completed against Alison Jones, the single against Cesar Miranda-Reyes and the double against Dennis Bulloch.

Having completed his task he finally lost to David Marsh but finished the overall winner with six wins. Ian Lines also had six wins including four TPs. David Marsh was on good form with five wins including a triple against Cesar, and Jeff and Phil were also well in the hunt, both finishing on five wins after Phil beat Jeff +15TP in a game which nearly went the other way.

Next up on four wins were the ever-improving Alison Jones and the canny Dennis Bulloch, who had a TP against Cliff Jones. Cliff had three wins including a TPO against Jeff. Also on three wins was Cesar, the highest handicapped off 2, who won the prize for most index points gained. Debbie Lines and Clive Goode had two wins each, leaving George Collin with one and John and Bryan bringing up the rear.

The weather was fine and sunny and the food and drink, courtesy of Tim Brewer and Geoff Strutt, plentiful. We'll have to wait until next year for the septuple and octuple.