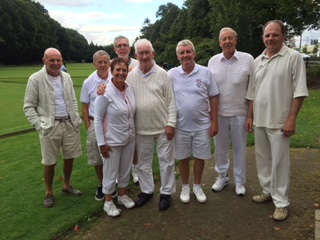 On the 5th September Nottingham Croquet Club held the Semi Final of the Murphy Shield as a convenient ground for Pendle and Craven vs Hunstanton. The Pendle team drove down the M1 in weather reminiscent of driving in a carwash. Thankfully both teams arrived safely and were met by our host who provided a very welcome cup of tea.

Pendle and Craven were represented by Libby Dixon (2), Keith Terry (3), Paul Dowdall (3) and Will Drake(6).

Round 1 saw Hunstanton win the doubles easily. The two single games both went to 3 games , with Pendle winning both.
Round 2 As the afternoon progressed it became apparent that the match stood at 3 all. The outcome would all came down to the game between Paul Dowdall and Chris Ward. Paul had won the first game and Chris was closely contesting the second. Both team participants all watched expectantly . However as there always has to be a winner, and Paul won out this time.

Pendle won the match 4/3 and go through to play the final against Watford.

Afternoon tea was provided by Hunstanton and was a very welcome touch after a very full day of play. Libby Dixon thanked David and members of both teams for their excellent play and especially for the spirit and manner in which all games were played.