Phil Nuttall of Bury won the AC All England Handicap 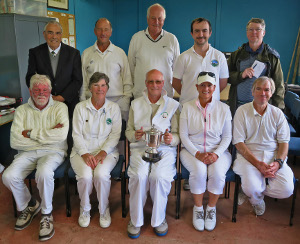 Players with the President of the CA and the Manager

The winner of the 2017 All England Handicap Final was Phil Nuttall (16) from Bury, who won all five of his games. In second place was Libby Dixon (18) from Pendle and Craven, with three wins. Neal Bacon (5) from Nottingham and Jeremy Pardoe (8) from Broadwas were third and fourth, also with three wins.

This year's competition began with 168 players playing preliminary heats at 30 clubs; 32 made it to the four area finals. The winners and runners-up from these were Neal Bacon and Adam Huby(7, Watford) at Edgbaston, Douglas Dykes (16, Surbiton) and Julie Sheahan (11, Merton) at Surbiton, Phil Nuttall and Libby Dixon at Fylde and Jeremy Pardoe and Robert Upton (3½, Dyffryn) at Camerton and Peasedown.

This year's final was held at Wrest Park for the first time since 1998 when there were 16 players and all six lawns were flooded for many hours. However now the club's new lawns drain more quickly; a Saturday afternoon downpour caused localised flooding, but the lawns were playable within half an hour even though the rain persisted. Games were limited to three hours and played as full bisque, base 10.

The first round saw +26 wins for Julie against Adam and Phil against Robert. Libby made a promising start against Neal but the bisques ran out, and Jeremy had a narrow win against Douglas. Saturday closed with Phil on three wins and Julie, Libby and Jeremy on two.

On Sunday morning Phil stretched his lead by beating Libby, and Jeremy beat Julie +2 on time. Douglas accounted for Adam and Robert suffered his fourth defeat, this time at the hands of Neal. The last round saw Phil complete a clean sweep by beating Douglas +5 on time, and Robert (the lowest handicap at 3½) finally broke his duck by beating Julie +3 in a tight finish.

What of the play? Well, we saw its infinite variety, as you might expect with such a wide range of handicaps and experience.Lots of good stuff - solid break play and use of bisques to set them up, lawn length take-offs judged to a nicety, and considered leaves. On the other side, there were times when tactical errors and a lack of knowledge of the laws proved costly, as in not recognising a wiring lift when it was due, but these are the views from the boundary. Things are different when you have the mallet in your hand,time is approaching, the bisques have run out, the rain is falling and you are faced with a five yard roquet needing to make a hoop or two to have a chance of winning. Who has not allowed the heart to rule the head and have the hubris of an over-ambitious hoop attempt followed by the nemesis of an easy roquet for the opponent? And even world champions have been known to sometimes play the wrong ball.

Thanks are due to George Collin for managing the event and acting as the ROT. A five round Swiss with eight players can be a nightmare (see Gaunt & Wheeler on this), but Phil simplified his job considerably. Thanks also to Geoff Strutt and John Bevington for organising lunches and teas, Tim Brewer for pre-final admin duties and John Dawson as overall director of the competition.

The All England Handicap is the most democratic event in the calendar and deserves more support. Without more data one cannot judge its state of health, but the numbers have halved since 1998 when there were 357 entries. Would two more area finals draw in more clubs, with an American block final for the six winners? One for the Tournament Committee.

The results are as follows: