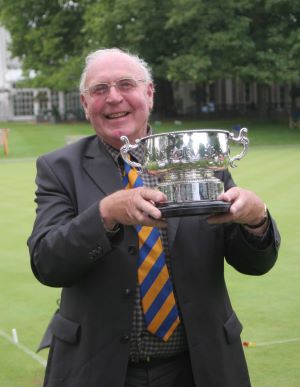 William Ormerod died peacefully at home on Friday afternoon 31st July aged 83. A legend of the Croquet world, he had been suffering from various illnesses for some time.

He played his first tournament aged 15 at Parkstone in 1952; his opponent was Miss Hedges, Lady Barbarolli's aunt. When she knew that William was musical, playing the 'cello, she said "don't let's play this silly game, we'll go inside and play some music".

60+ years later he was still enjoying AC and GC at Parkstone and Swanage, Dorset with many memories of past players, croquet partners and team members. His record includes: President's Cup won 1966; Men's Championship won 1970 final v Pat Cotter, amazing multisports player, scratch golfer, bridge international, crossword setter and Senior Classics Master at St.Paul's school; with G.N.Aspinall lightning-fast 15-20 mins. triples won Open Doubles six times between 1971/8: member winning teams for England and GB 1956 in England; 1963 in NZ; 1969 in Australia;1974 in England, all AC. Losing finalist to John Solomon in NZ Open 1963; Losing finalist in British Open 1962 (to Pat Cotter) and 1977 (to Michael Heap). In 1962, when he spent a long time pondering what to do, having over-approached hoop 3 with partner ball on 4-back, Pat Cotter called out "Di Ecce hora!" (God, look at the time!).

Member of the England A-Team v USA at Palm Beach in 1981 with Bernard Neal, John Solomon and Nigel Aspinall; won American Rules Croquet and AC and maybe helped with USA interest in AC.

He ended his croquet career enjoying GC at the Swanage club started by Roy Smith ACA where he coached nearly 100 members as complete beginners becoming improvers and some league players. Also enjoying excellent lawns for AC at Parkstone (East Dorset). He said that it takes two weeks to learn and play Golf Croquet, but two years for Association Croquet. Both are excellent games for players of all ages; and for types from Smith to Lord Rosebery.

William said that his memorable AC Match was v Keith Wylie in 1982. Keith quadrupled William's 3-back ball out and peeled his partner ball from hoop 1 to hoop 5 in one turn, then pegged out both forward balls, leaving his on 5 and mine on hoop 1; a 22-point turn. William's contact left me in position at 1 with Keith near corner 3. He hit the 35-yard shot, and went out on 2-ball break!

His most memorable GC Match was winning the Kate Jones Memorial Trophy in 2014 v Chris Roberts 7/6 7/6 with a stymie at the golden hoop. He was able to say that this was his first winning trophy at GC since winning Open GC Doubles in 1954 (60 years ago) partnered by Great War and Second World War hero Brigadier A.E.Stokes-Roberts. So, with or against a Roberts, it was a great personal occasion.

He reckoned that the finest players he'd seen in 68 years to rival Keith Wylie were Reg Bamford equalled by Robert Fulford. Now there's fence-sitting! Finest Swings and shooting prowess (apart from above):- John Prince,NZ, Nigel Aspinall, David Maugham, Rutger Beijderwellen, Harry Dodge, Tobi Savage and Jonathan Powe (when he has days when his swing is straight!).