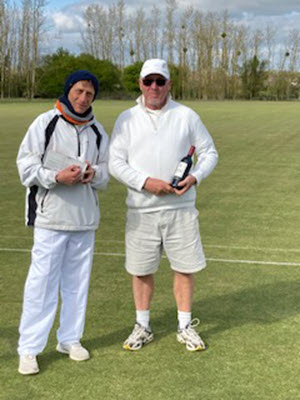 A full field of 16 players assembled at a bright and sunny Wrest Park for the first tournament in the new National Series of Zero Plus tournaments. Little did they know that a cool and persistent north-easterly wind would bother them throughout the weekend, but it did not appear to affect the standard of play.

The field was split into 2 blocks of 8 players on an all play all basis. In Block A, Tony Butcher (Southchurch), who travelled daily from Southend, made his journey worthwhile with 5 wins. He was pipped by Geoff Johnson (Watford) with 6 wins. Simon Draper made a nonsense of his handicap of 5 with 5 wins and Paul Durkin completed the top four with 4 wins.

In Block B, George Collin (Wrest Park) went unbeaten all day with 7 wins, closely followed by Dr Ron Carter (Ealing) with 6 wins. Brian Havill (Watford) and Paul Gunn (Wingrave) took the final places in the knockout with 4 wins each.

The Quarter Finals comprised one 19 point game. Paul Durkin dispatched George 10-4 in a reversal of their respective form on the previous day. Tony and Brian had a battle royal with Tony winning 10-8 and Paul Gunn managed to keep his head in front throughout his game with Geoff before emerging as a 10-8 winner. In the remaining match, Ron beat Simon 10-6.

In the Semi-Finals, Paul Gunn maintained his impressive form to beat Ron 10-4. Paul Durkin and Tony had a hard-fought close encounter before Paul won 10-8. If there had been a trophy for the overall winner, the engraver could have started his task immediately in anticipation of the Paul versus Paul Final.

The Final, the best of 3 x 13 point games, highlighted the skills of both players. Both excel at positional play and distant clearances and both are capable of outrageous jump shots if required. Paul Gunn won the first game 7-6 and came back from 1-3 in the 2nd game to level the score at 3-3 and to play almost immaculately to complete a 7-4 win. It was an admirable performance by Paul Gunn who had struggled to find his best form after two very tough years of ill health.

In the Bowl, Simon defeated Brian in the Final, and Geoff beat George to decide the places. The Plate was played with great enthusiasm and obvious enjoyment by the 8 players involved. It was won by Ross Bagni (Leighton-Linslade) with Glynis Davies (Northampton) as runner up.

A distanced presentation enabled all players to appreciate the efforts of Chief Groundsman, George Collin and for Tournament Manager, Richard Keighley to express his thanks to his fellow club members for their help in staging the event subject to the prevailing Covid-19 restrictions. Finally, Cliff Jones was kind enough to act a Referee of the Tournament.