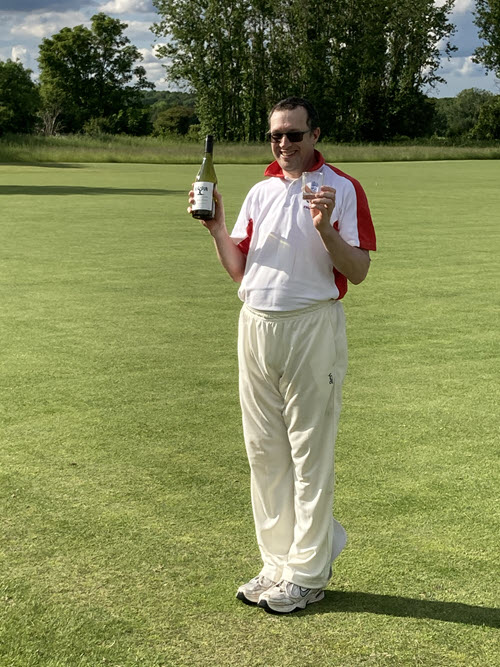 Participants were delighted by the warm and sunny weather which prevailed over the weekend of the 5th and 6th June for this tournament. It had attracted a full complement of 16 players including top seeds Nick Archer (-3) and Chris Roberts (-3).

The group was split into two blocks of 8 players to play each other on an all play all basis. In the first block, Tim Russell (Roehampton) pipped Nick Archer (Watford) with a perfect score of 7 wins and they were joined in the knockout by Jayne Stevens (Northampton) and Roger Goldring (Phyllis Court) with 4 wins apiece. David Bell (Leicester) was unbeaten with 7 wins in the second block and he advanced with Chris Roberts (Phyllis Court), Stephen Custance-Baker (Taunton-Deane) and Paul Gunn (Wingrave) who all achieved 4 wins.

The Quarter-finals were contested on a best of 3 x 13 point games. Chris Roberts and David Bell needed only 2 games to beat Jayne Stevens and Roger Goldring respectively, but Tim Russell and Nick Archer were taken all the way by Paul Gunn and Stephen Custance-Baker respectively.

Predictably, the Semi-finals were both strongly contested by the best players on view. Nick Archer beat David Bell and a weary Chris Roberts overcame Tim Russell. Chris was obviously still feeling the effects of this tussle when he began the Final and lost the first game to Nick Archer 3-7. He rallied in the 2nd game and held the lead for a while before Nick finally ran the 12th hoop to deservedly win the tournament

The Plate was keenly fought out over 5 rounds of games with Tony Butcher (Southend) beating Chris Heath (Guildford) in the play off.

The Manager presented prizes to Nick, Chris and Tony and thanked all participants for the help they had given him to stage the event, and his fellow members for the work involved in the preparation of the lawns. He also noted that the equivalent weekend in 2022 will mark the Queen's Platinum Anniversary of 70 years on the throne. As Patron of the Croquet Association, will she insist that croquet features in her celebrations?