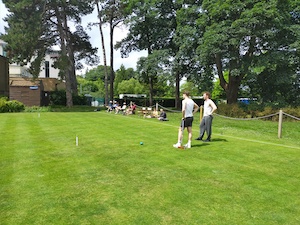 After the non-year we had last year, Oxford croquet cuppers 2021 was a success.

We came into the summer term hopeful that the world would be getting back to normal within the term. However, things were not back to normal yet. With many colleges having restrictions on guests and some even having marquees set up, to provide outside dining space, on what would usually be their croquet lawns. There was no way we could take advantage of all the colleges' lawns to hold a massive five-hundred- and-twelve team event as we usually do. Instead of this, we ran a smaller event for thirty-two teams, taking only one from each college, on OUACC's lawns. In the end we had twenty-seven colleges get involved. We then opened entry again to invite second teams to apply from colleges who already had a team. This filled up the event.

And so the competition began.

Teams found the University lawns amazing to play on in comparison to their college lawns. With the lawns being larger, flatter and faster than most college lawns. Additionally, proper hoops, tighter than in most colleges, were another difference. This helped showcase some excellent croquet. With experienced college players being able to play more accurate shots than they usually would, and hoop running really becoming a true test of accuracy. We also had a few novice teams take part. It was great fun teaching people who had never played before how to play in their first-round games. With a whistle stop tour of the route; the cycle of roquet-, croquet- and continuation-strokes; and the different types of croquet strokes, these new teams would go out and play. It was great for getting new players trying croquet, and in the process squashing many of the mythic laws that float around, such as putting a foot on the ball or sending your opponent back to the start of the route by hitting them against the peg. We hope to see many of the new players who tried croquet for the
first time back for more next year.

As well as novices, many colleges sent previous cuppers teams with very technically good players who had all the usual croquet strokes under their belts. It was great to watch games unfold between these teams, some of which were taking part for their last time before leaving Oxford.

The games were a delight to observe, and quickly became a highlight of my week. I think participants also benefitted from experienced players overseeing their games. With more complex rules like the wiring rule being explained properly to them. This should improve the standard of croquet played at all colleges within the University as things filter down from these players to their peers.

We then came to the cuppers-final in 9 th week, Brasenose vs Magdalen. The matches are played as two doubles and the score is taken on aggregate. The first was a gruelling game with good play from both teams though Magdalen gained themselves a three-hoop lead to take into the second game. Brasenose put up a huge effort but could not quite get a break going for themselves in the second game. Magdalen however kept playing their game calmly and accurately, furthering their lead and taking home the cuppers trophy and some champagne for their efforts.

Overall, it was a great competition. Lots of new players tried croquet while old ones came back to play for perhaps the last time in their lives. Though we do hope some of them manage to join a local club, whether now or in the future. Having experienced players on hand and competition standard lawns to play on gave people an experience of croquet closer to what they would get in a real CA competition. We managed to host an event following the Covid restrictions set by the Government, the CA and the University safely and effectively. Personally, I look forward to seeing how next year's cuppers goes, with my fingers crossed for the large-scale event to make a comeback!