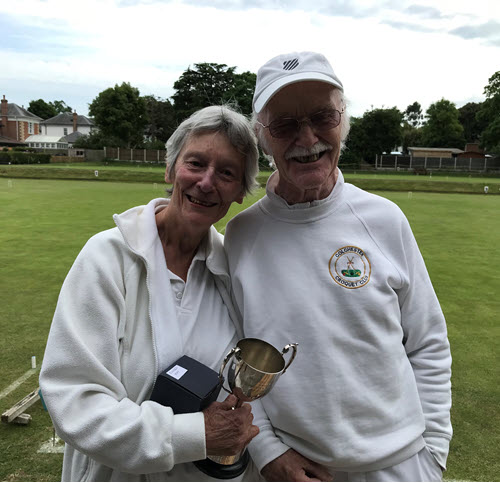 by Nick Steiner at Colchester
26th May (AC - Handicap)

The format was one full day of doubles, followed by 2 days playing singles.

Six pairs took part in the doubles, playing fourteen point games. With a time limit of One and a half hours. Five games were played, each pair playing all others. It was a tightly packed schedule, but we managed to squeeze in a delicious lunch and some cake for tea. A light drizzle started shortly after the start of play, but that didn't interfere with the enjoyment and in the afternoon the sun came out and warmed us all up. A great day with smiles all round. A close run contest with two pairs on four wins, but as Mark Homan and David Robinson beat Hugh Gilbert & Francis Lambert, they won the trophy.

Sixteen competitors entered the singles with handicaps ranging from minus a half to twenty two. The format was flexible Swiss handicap to the base 10. The final was a nail-biting event with Wendy having most of the play with her fourteen bisques gradually disappearing as the time was ticking away. Stephen managed to catch up a bit, but when time was called he was still behind. Wendy was unable to finish, and Stephen missed the final shot leaving Wendy +2 on time.