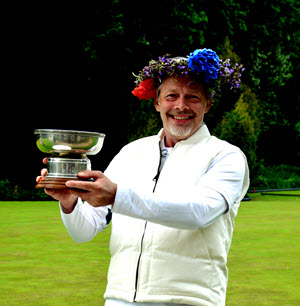 Alex McIntyre with the Sage Bowl

by Richard White at Nottingham
31st May (AC)

Alex McIntyre retained the Sage Bowl at the Nottingham B Level Weekend.

Keeping with tradition Alex wore the Sage woven Crown in consecutive years having beaten Alan Clark in a, somewhat one sided, final on Sunday afternoon.

The semis were much more fiercely contested between North London friends Gary Bennett and Alan and the local lads Alex and Mike Hedge. Both pretty much finished just in time or on time. It was therefore decided that the final would be a single game only.

Alex certainly proved his point of not getting the trophy engraved last year.

With a handicap range from 0 - 7 the weekend threw up quite a few surprise results. None more so than Alan Clark's who beat players with much better handicaps to reach the final.

Other notable performers were Anthony Hardwick (Blewbury) and Peter Hanley (Nottingham). Luckily for the other 21 players all three received deserved handicap reductions by the end of Sunday's play.

Nottingham provided almost half of the 24 capacity entrants, 6 of their 9 superb lawns, well set but fair hoops, 2 generous clubhouses and a picturesque setting. The new West lawns were particularly impressive with many players opting, where possible, to play on them. A far cry from previous years where players were reluctantly told 'you're next game is on the other side'.

All players appeared to leave happy, well fed and better for the experience

Personally, having had a 2 year absence from Association Croquet is good to see it thriving, or at least it is at Nottingham.