The Official Rules of Garden Croquet

Croquet can be played in many different forms. Serious croquet is played at international level including world individual and team championships. Mostly though, it is played as a casual, social game by millions of peoples around the world in their own gardens. These rules are the Official Rules of Garden Croquet as authorised by the World Croquet Federation. They allow for some variations and also for added complexity so that you can move from social garden croquet to more serious croquet.

Do you need to buy a Croquet set for your garden?

These rules relate to croquet played with six hoops and four balls and are based on Association Croquet rules. Other variations are possible, as described later

The Rules of Garden Croquet

The Object of the Game

The game is played by two sides. One side has the black and blue balls and the other side has the red and yellow balls. The object of the game is to advance the balls around the lawn by hitting them with a mallet, scoring a point for each hoop made in the correct order and direction. The winning side is the first to score the 6 hoop points and then finish by scoring one peg point for each of its balls. See diagram for the positioning, order and direction of scoring hoop points. The winning side will therefore score 14 points.

The sides are made up of either one player per side (singles) or two players per side (doubles). The rules are the same for singles and doubles. The ways to play doubles are described later.

The players take turns and only one plays at a time. At the beginning of a turn the player (called the "striker") has one shot. After that shot the turn ends, unless extra shots are earned. The turn ends when the striker has no more extra shots to play. Then it is the opponent's turn to play

How to Earn Extra Shots

You can earn extra shots in two ways.

Various strategies are possible to make hoops for your own balls and to make it more difficult for the other side to make hoops. The best strategy is usually to use the other balls (including the opponent's) to earn extra shots and score a number of hoops in one turn. This is called making a break.

The Lawn or Court Setting 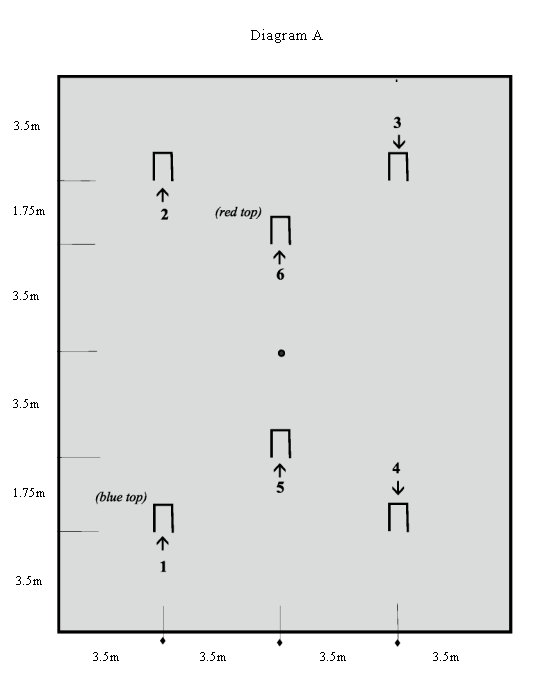 For other sizes of lawn see variations.

If one of your hoops has a blue top then this should go in position 1 and is the first hoop and the one with the red top denotes the final hoop and goes in position 6. The order and direction of scoring the hoops is shown in the diagram.

Each ball must score the six hoops in the right order as shown and then score the peg point. A side wins by scoring the six hoops for both balls and the two peg points before the opposing side.

How to Start the Game

Play starts from a point a metre in from the boundary in front of the first hoop.

The side to go first hits either of their balls into the lawn. When the turn has finished the other side plays a ball from the starting point. You are allowed to gain extra shots (of either kind) immediately.

After the First Four Turns

When it is your side's turn to play you must first choose which ball to play. So if you are playing red and yellow, then at the beginning of each turn you can choose whether to play red or yellow. The ball chosen is the only ball that can be hit with the mallet during that turn. A turn consists of a single shot unless with that shot you earn extra shots.

What to Do When You Earn Two Extra Shots

If you hit your ball so that it hits one of the other three balls you earn two extra shots. The first of these extra shots (the croquet shot) must be taken in contact with the ball that has been hit. To do that you pick up your ball and place it anywhere around the ball that has been hit. When you play the shot you strike only your striker's ball but both balls can move. This shot enables you to position both balls depending on what type of shot you play.

The second extra shot (the continuation shot) is then played from where your striker's ball lies.

After scoring a hoop you can start to earn extra shots again by hitting any of the other three balls.

Ball Off the Lawn

If any ball goes off the lawn it is replaced a metre in from the edge where it went off the lawn and play continues without any penalty. If at the end of a turn, a ball lies within one metre of the boundary, it is moved into the lawn so that it is one metre from the boundary

More About Scoring a Hoop Point

The hoop point is scored for your ball when it has passed sufficiently far through the hoop so that all of the ball has passed beyond the wire of the hoop on the side it has been played from. See diagram below.

Striking the Ball with the Mallet

You must strike the ball with either end face of the mallet but with no other part. The ball must be struck cleanly. You cannot move hoops or the peg to enable a shot to be played.

Putting your foot on your ball (or indeed touching any ball with your foot) is not allowed.

Finishing and Winning the Game

A side wins the game by scoring six hoop points for each ball and then hitting the peg with both balls. This is usually done in the same turn during a croquet shot and the continuation shot. Ideally, you take croquet from your partner ball near the peg. Line the balls up so that in the croquet shot the partner ball hits the peg, then in the continuation shot the striker's ball hits the peg.

A ball that hits the peg and has scored the six hoop points in order scores a peg point and is removed from the lawn immediately.

There are two ways to organise doubles.

It is usual to play doubles with each partner 'owning' one of the balls of their side, and hence when the side opts which ball to play, they are also opting which partner will play. So for example one player will always play the red ball and his doubles partner will play always play the yellow. At the beginning of a turn, the side can choose to play red or yellow. This determines which player plays that turn.

In the other form of doubles, partners play alternate strokes. This means that one player plays the first shot of the turn. If he earns extra turns then the next shot is played by the partner and subsequent shots alternate. In this version, both partners stay more involved with each turn.

If there are six players then play as two teams of three. In this case, the game is only won when all three balls of the side have run all their hoops and hit the peg. You can gain extra shots for the striker's ball from the other five balls.

These variations and additions to the rules can be used as you become more interested in the game and want to add more complexity. Each variation can be added separately or they can be combined. If you use all these variations then the rules will be close to those used in club, national and international Association Croquet competitions throughout the world. Of course, you must agree on which variations you are using before the game commences.

If you have limited time you can play a time-limited game. Agree on a finish time. The side which has scored the most hoop and peg points when time is called is the winner.

The normal size court for Garden Croquet is 17.5 metres by 14 metres. However, you can play on other size lawns to fit the particular characteristics of your garden. The longer the grass and the rougher the surface, the smaller the court should be. You may need to reduce the measurements to fit onto the available lawn. If reducing the size, keep all proportions the same as for a normal-sized lawn (i.e. reduce all length and width measurements by the same proportion).

If you have a good quality lawn (flat and with very short grass) and you have reached a high skill level then you may like to increase the size of the lawn. Again keep the proportions the same. At croquet clubs, you will find most lawns are 32 metres by 25.6 metres but this is usually too large for Garden Croquet.

The Croquet Shot (the First Shot of the Two Extra Shots)

You can introduce two constraints on the croquet shot

The penalty for either fault is that the turn ends. Thus you lose your second extra shot and your opponent now plays. This introduces additional skills to the game.

If you want to play a longer game then you can choose the 26-point game. In this version, each side tries to score 12 hoop points for each ball and the two peg points. The first six hoop points are as in basic Garden Croquet then the hoops are played in the reverse direction (see diagram B). The position of the red-topped hoop (if used) is moved so that it denotes the final hoop). This version is the one used for most major Association Croquet Championships. The game played under basic Garden Croquet Rules is sometimes called 14-Point Croquet. 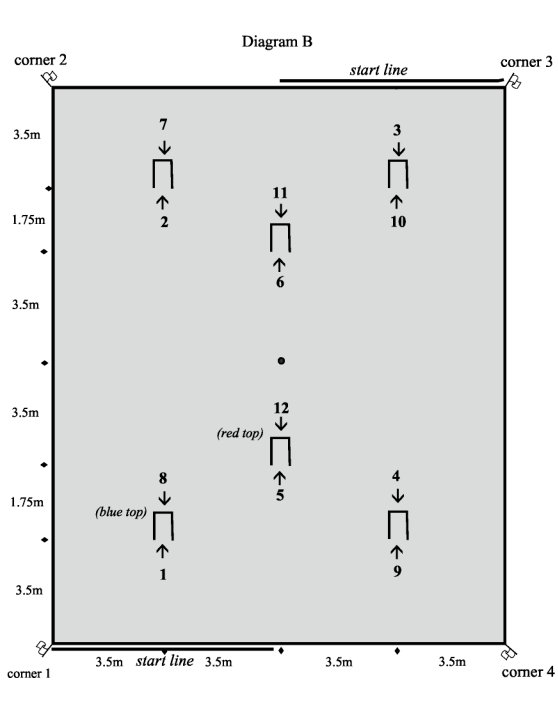 If you are playing a game between players of different ability, it is possible to use a handicap system. With this, the weaker player is awarded a number of extra turns, which may be used at any point during the game following a 'normal' turn. In the extra turn, the player must continue to strike the same ball he was using in the preceding turn. The number of extra turns required may be set after some experimentation to give the fairest chance to both sides. Extra turns are often marked with white sticks at the edge of the lawn, which are pulled out as each extra turn is used, but any markers will do.

Other Variations of Croquet

This is another version of croquet using the six hoop setting. It is simple in format and there are no extra shots. For more details of how to play and the rules see Golf Croquet

A quite different form of croquet uses nine hoops and two pegs with the hoops in a double diamond formation. This latter form of the game is more common in North America and some European countries. Rules for this type of nine-hoop croquet can be found on the USCA website under official USCA rules for Backyard Croquet.

Do you want to upgrade your Croquet set?