Trial Version of the Wrong Ball Rule for Golf Croquet

Warning: This page is archived and not maintained. It is provided for historic or background interest.

Below is the alternative version of rule 11, which will be in mandatory use for all the major CA sponsored events during the 2013 CA season and for optional use in all other listed CA events at the Manager's discretion. It will not be used for the All-England GC Handicap, the Grass Roots and Centre Stage. Individual Federations will determine its usage in all Federation events.

Law 1(a) defines which ball belongs to each player and Law 1(e) defines the correct sequence in which the balls should be played. If any player (or Referee in Charge) believes that

(1) a ball has been played out of sequence, or

(2) a player has played a ball that does not belong to him, or

then he shall stop play immediately so that the matter may be investigated and play continued in accordance with the relevant remedy set out in paragraphs (b) to (d) below. In those paragraphs, the "last player" is the player who played the stroke immediately before play was stopped and "last stroke" and "last ball" refer to that stroke and the ball played therein. The "opposing side" refers to the side opposing the last player. The "previous stroke" refers to the stroke immediately preceding the last stroke and the "previous ball" refers to the ball played in the previous stroke.

(b) Continuation Without Penalty

(1) the last ball followed in sequence from the previous ball, or

(1) the last ball did not follow in sequence from the previous ball, and

(2) the previous ball belongs to the player who played it

then, at the option of the opposing side, either

(ii) the last stroke is not replayed, any points scored are counted, the positions of the last ball played and its partner ball are exchanged and play then continues by the opposing side playing the ball that follows in sequence from that partner ball.

In all other cases, no points are scored as a result of the last stroke, any striking fault committed in the last stroke is ignored and the opposing side decides

(2) with which of its balls it will play next.

Play then continues by the opposing side playing the ball that it has chosen under (2).

A player (or a Referee in Charge) shall forestall an opponent if he believes that the opponent is about to play a stroke to which (c) will apply. He shall not forestall in any other circumstances. 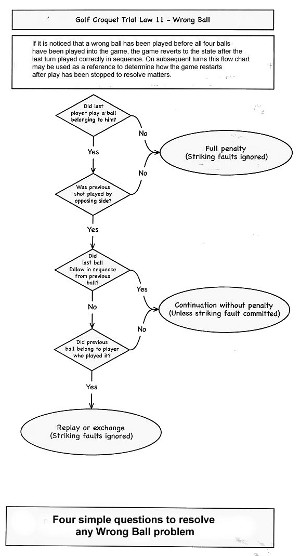 In practice the trial law introduces very little changes in the intent of the law other than the introduction of an Exchange option (shown in coloured type in the law). As the new option is specifically designed to eliminate very unfair circumstances that can occur after a long period of out of sequence which will not be very common. To assist in the understanding of the trial law a simple flow chart has been designed and is shown below.

The total differences between the present and trial law are as follows:

Although the initial purpose of the trial is to discover whether the additional Exchange option is a valid and workable way of solving some known problems, a second aim is to prove how effective the chosen words of the trial law are in promoting understanding of the requirement for dealing with wrong balls. Our GC Laws Committee firmly believe that any law which uses terms that effectively have to be translated by another law, e.g. the striker, will never lead to easy understanding by most club players. The wording of the trial law is based upon that used in the Idiot's Guide to the Wrong Ball Law that many have found very understandable. We now believe that with use of the flow chart below, most club players will be able to understand the workings of the wrong ball law which is something they have not managed previously.

To ensure maximum benefit is obtained from the trial of the exchange option, a simple reporting form has been designed and will be sent in the next few days (early April) to all clubs running tournaments under the trial rule. Filling in of the form is not an onerous duty and all information submitted would be greatly appreciated.